We hit the streets for you
we garb ourselves in blue
we trim our hair anew
for our aboki, whose Deen is full.

This rout you never plied
to a garden you've always spied
for An hibiscus that never dried
indeed, our aboki never lied

You become a man today
your worries, blown away
your heart, glows at bay
for your half has come to stay.

This is for my Aboki
whose 'aye' was never 'nay' 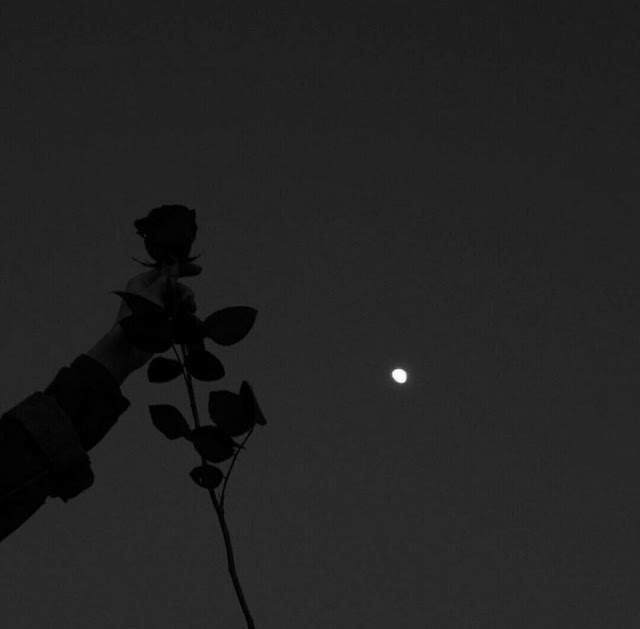 Posted by Muhammad Basheer at 11:26 PM No comments:

A thing to Say

I can understand your intent.
I can read between the lines.

I know you know I know not much
I know I just have to say this once...

Thank you a million times n ways,
Like the number of sand particles
across the Sahara. 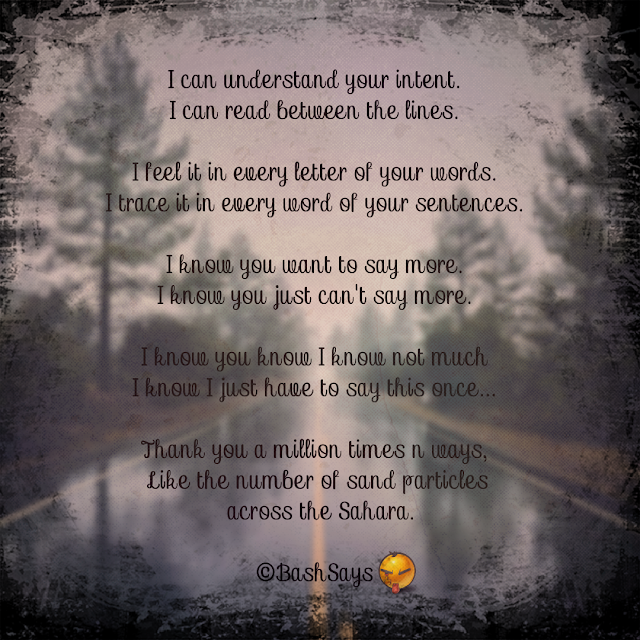 Posted by Muhammad Basheer at 3:41 PM No comments:

When we were Blessed.

Here Born, we were
Into wealth, so rare
Our desires, quite fair
A lunch a day, we cared
Blessed we were, Sincere!

Streets we trekked, foot bared
Scraps we picked, lone paired
Fashion we craved, fic-aired
Times were hard and we despaired
Moma said, "Never be scared"
Blessed we were, Sincere!

Life seemed, ill faired
Yet,enjoyable was,our fair share
Amidst all of these, test bared
We knew something was certainly clear
Sustenance was coming and it was near
Blessed we were, Sincere! 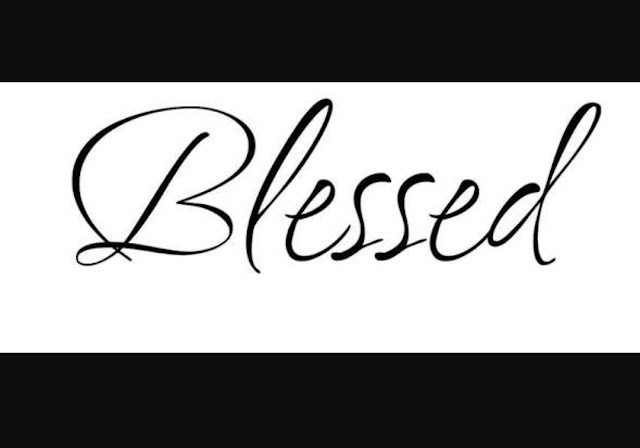 ATTAINING UTOPIA: PATIENCE AS A RECIPE. (1)

Patience is considered a rare virtue in our present day world. A world where everything seems to be super fast- Light train, Telecoms, Wi-Fi- are just but a few products of our fast evolving world. Knowledge hasn't been spared of this rapid evolution with Computers Now having the ability to read minds. We all want to drive on the fast lane because, of course traffic could be a hell of delay. Little then will one be surprised at the rare virtue of patience in our new fast moving world.

Patience is believed to be the ability to keep cool in the most difficult of situations. It could be a situation where you remain calm while waiting a long period of time without hurrying. It also takes a great deal of patience to deal with difficult people. Indeed, patience could be the one missing spice in our societal recipe.

While in a heated argument with people, a patient person will allow his counterpart to establish his point (and sometimes, satisfy his ego) before stating his. In a bid to establish his, while the other party does simultaneously, chaos could break out leading to serial conflicts. Similarly, while waiting in traffic, some drivers - who mistake their act of impatience for smartness - take to the pedestrian pathway and drive through them only to get to the point of stoppage and add more salt to the wound of the long traffic.

The lack of patience plays a pivotal role in conflict outbreak in many communities. Most communal clashes have been born out of reprisal attacks. One which could have been averted, if complaint were lodged and a level playing ground was created to resolve them. The lack of patience have led to the loss of valuable properties and even precious lives. A second, minute, hour or even a day of wait goes a long way in sustaining the peace a society enjoys.

Some months ago, in some part of the world, the President of the Students Union of a certain University was allegedly slapped by a lecturer for simply soliciting for some students who wanted to write their computer based exam (CBT).  While many accused the President of of being naive, complacent and displaying high sense of cowardice. Others praised his brave act of not getting tempted to have retaliated. An action which could have led into break down of law and order. Instead, the Case was reported to the right quarters and it was resolved after a truce was brokered by the Vice Chancellor of the supposed school between both parties. This singular act of patience went a long way in maintaining the long celebrated peace they've claimed to have enjoyed over the last decade.

While utopia might be imaginary, it could be achieved if we all take a pill of patience wherever we go. You might be dubbed dumb, clueless or an epitome of cowardice, what matters most in the end is how well you've managed the situation from disintegrating into conflict. You'll be saving our world from chaos. After all, fighting the war isn't the problem but Organising the post war peace , as opined by Aristotle. 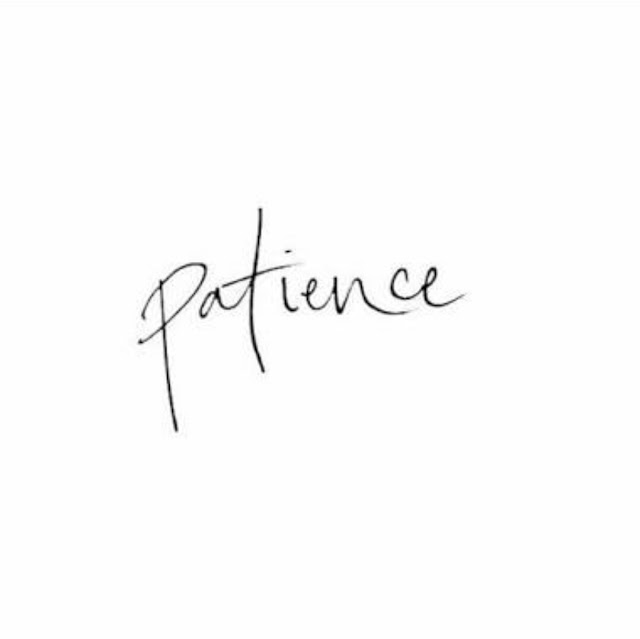 Posted by Muhammad Basheer at 3:00 PM No comments:

Emmanuel Macron, the 39-year-old centrist whose insurgent independent candidacy took millions of his compatriots by surprise, was elected president of France on Sunday, defeating far-right leader Marine Le Pen  with a projected 65.1% of votes. Le Pen got 34.9%, according to projections.

This will be his first election into public office and will have to wait a month or two to know the fate of his policies in the parliamentary elections, where his party currently holds no seat. 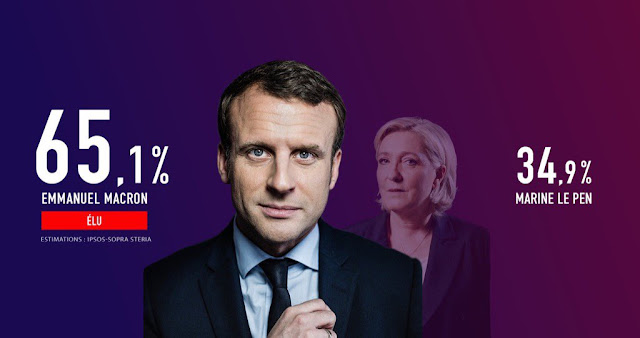 Posted by Muhammad Basheer at 11:48 AM No comments:

A MONKEY FOLLOWING A MONKEY

3
No inscription to denote, no relic to possess
only the ability to distil the hunch of survival
We were not passers-by – we did not live in vain:
With this hand I touch,
listening to the psalm of pulsation
intuiting the lesson of eternity


5
This river never mingled with the river
Ever since boats were invented, fishing and the preparation of fish,
and the fruitful bounty of plenty was harvested,
since channels were cut and dredged
this river is Blood, stained with the tincture of history
a land inherited by vengeance
a woman helplessly roaming and roaring in a cave

Was I there – there and then?

http://www.poetrytranslation
Posted by Muhammad Basheer at 1:38 PM No comments:

A Monkey at the Window

I
The little boy, playing in bed
while his wounded mother cooks,
is throwing little words and circles
out of the window.

She smiles
(the whole world lights up)
he chatters excitedly - What can he see?

There's a monkey at the window -
behind the door!
But he is falling
into darkness.
And though he never raises a cry
he holds up his claws - this dark
stormy
boy.


II
She never taught him how to cry only how to sing.
Happy in herself - just as she wished to be -
she taught him endless space and vastness
and she calls him: Open-hearted.

Behind him a mountain of metaphors
in front a river a mouthful of night
and a train of caravans calling him away.
(Where is that thread
that fire
the skill?)

Running - down an alleyway
he splashes cooking oil all over his shorts this boy!
He wets himself
with laughter
running through Eternity -
through this alleyway
this pack of dogs
the conspiracies of fate!

The solid front door remembers the hand that made it -
You are the key -
and the creak of the universe — it's your sole secret
You lean your dreams and future against it.
For its sake you endure the woodworms
gnawing through your heart
the reek of damp
the hammering of enemies and relatives.
(Long is the absence of light
that paints things awake -
Long is the presence of paint!)
You come home exhausted — from wherever you've been
the wind at your side — just as you wished
toyed with by traumas.
Once he made necklaces from seashells
colouring them with his own fairytales
once he made friends with strange frogs
- and all the while she's watching him
from behind the door /from out the window
(when she runs to pick him up
he will not raise
a cry!)

In the forest the lonely one knows all the voices
beckoned by the eyes of loved ones
their songs are luring her
with their tender fingers
and her own translucent solitude.
She sits in silence
close to every thing
brewing tea
stirring the porridge.
In the garden
of a strange home her home
she welcomes the pots and pans
to the sounds of morning.
Scrubbing everything in its proper place
one eye on the radio
that calls her to those distant sands
the desert.
But her colour flow like a river
so she can sing….
And that boy?
………. ………….
In a green forest
or a red forest
or a desert
now who calls him to Eternity?

poetry translation
Posted by Muhammad Basheer at 1:35 PM No comments: